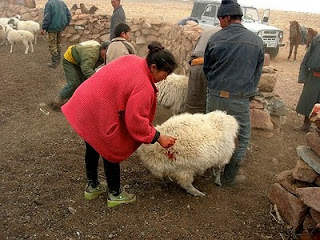 Did the headline get your attention? It's one we've all been waiting for and the story of a new study which was reported to suggest this, was carried in many media stories including this one on aol.

Curious about this, I traced down the study upon which the story was based. The study was published, I found, in "The Journal of Psychosomatic Medicine", and the abstract is available on PubMed.

At the end of 3 weeks, they were asked to provide urine samples and also to fill out a survey about how stressed they felt.

The two calorie restricted groups reported higher levels of stress on their surveys as well as evidenced higher amounts of cortisol in their urine than the controls (cortisol is thought to be the "stress hormone" produced in the "fight or flight" syndrome and pundits have theorized that higher levels of cortisol might cause weight gain but this is strictly theoretical at this point).

Where the media got the "higher risk of heart disease" must be that stress is considered a factor for heart disease as well as numerous other illnesses. Unfortunately, a three week period of stress could hardly be considered as "life threatening".

The study was initiated because the researchers wanted to see if the stress of calorie restriction was a factor in diets being largely ineffective in most people and also if the physical presence of elevated levels of cortisol could possibly be sabotaging efforts to lose weight.

"Dieting may be deleterious to psychological well-being and biological functioning, and changes in clinical recommendations may be in order."

While this is a conclusion we all like to hear (and suspect may be true in many cases), the study had many flaws as far as "proving" this theory.

First, if a person embarks on a lifestyle change and habit changes (in order to restrict calories), the greatest amount of stress will be felt in the first several weeks as they are getting used to the changes and this probably could be said of any healthy lifestyle changes such as indicated in a HAES lifestyle change as well. It has been said, it takes 90 days to form a habit.

However, after the 90 days, the stress levels resulting from any habit changes including calorie restriction, would have to be examined again, because as one gets used to the new program, one's stress levels would be suspected to diminish. (No one has determined whether the higher levels of cortisol in the experimental groups of the 3 week study were from the stress of change or the stress of actual calorie restriction, because the study did not last long enough to really gauge this.)

Secondly it would make a big difference in stress whether the participants in the "intervention" wanted to be on these programs or not. That is, if the women were of average weight or opposed to dieting or had never dieted before, this would make a big difference in the amount of stress experienced in study participants. We are not told this in the abstract - I am, at present, trying to obtain a copy of the study article.

But this again raises the much discussed question, is calorie restriction really unhealthy? The jury seems still out on this one, it appears, with passionate advocates on both sides of the issue.

The following should be considered:

To start with, it's a known fact that in outlying areas where food is not as available as it is in the USA and there is no electricity etc, people do live on about 1200-1400 calories a day and survive well. In fact, it has been theorized that one of the genetic factors explaining why some of us are so weight loss resistant is that our ancestors lived in places like Chihuahua, Mexico and/or Outer Mongolia and we carry those genes.

It also has been observed that in places with no TV for entertainment, and no cars, and people walking to every place they need to go and doing something active for fun like playing running games etc and of course, carrying on a daily life which burns a lot more calories than does life with modern conveniences, that obesity as well as heart disease and diabetes are practically unheard of. For example, the Pima's in Mexico are said to average about 40-50 hours of hard physical labor a week.

It also should be noted that these people are typically eating a diet consisting mostly of veggies and grains with only small amounts of meat.

Quite a bit has been written about this phenomena (ex "The PIMA paradox") in which two genetically identical groups of people have very different bodytypes depending on whether they live in the USA or in outlying places as described above. That being said, the Pima's in AZ were described as "lean and sinew-y" by an observer around 1900.

On the other hand, while it is true that some rat studies have suggested that calorie restricted rats live longer than those allowed their fill, scientists have pointed out that this only shows that overfed under exercised rats succumb faster than those rats which exercised instead of eating all they wanted. And besides us not being rats (and they know we have a different chemical makeup after the Leptin fiasco), it also should be pointed out that rats in the wild have to exercise a lot to obtain their food and again, it's far from eating their fill. They tend to be lean because of this.

Also, those who compare the lack of obesity at the turn of the 20th century forget that people also didn't have a very long lifespan then, (average about 49 years) - however, they often died of infectious disease rather than "old age diseases" so we don't know how long they would have lived with modern sanitation etc.

The picture becomes more and more muddy. If a person can make lifestyle changes and eat a very healthy diet, it might be possible to somewhat calorie restrict without threatening one's health - studying chronic calorie restrictors (CHRON's they call themselves) has suggested this. On the other hand, people who calorie restrict in an unhealthy manner (as often true of dieting) likely, do face health risks and there is quite a bit of research suggesting that the "weight cycling" most dieters tend to do (gain and lose and regain) is highly risky.

The bottom line might be, if calorie restriction takes out one of a person's greatest pleasures (eating does provide many folks with endorphins), it might indeed cause enough stress to actually make things like diabetes and heart disease worse (instead of better as the advocates of dieting keep shouting at us).

There has to be a happy medium... perhaps that IS what Health at Every Size or HAES is all about. (Note: see http://www.lindabacon.org )
Posted by Sue Joan at 5:23 AM No comments: