Biggest losers - the people or the show? 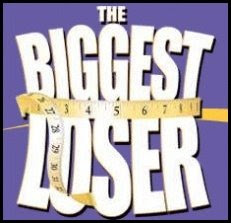 In this month's TIME MAGAZINE was a short article about "Reality shows which aren't really reality" in reviewing a movie about teens.

That phrase struck me because they've been really hawking the new season of the TV show, "THE BIGGEST LOSER". And somehow, for no reason I can fathom, this show is wildly popular.

I not only cannot understand fat people volunteering to be on this show and apparently losing much of their dignity in front of TV cameras but I cannot understand why people watch the show because the dynamics of dropping someone every week often for no apparent reason or the cameras showing these people fighting with each other or wincing during the hours of grueling exercise, all tend to annoy me to the point where I cannot stand to watch the show.

Worse yet was when I did some research on the show and found out that the way they lose so many pounds a week was that they worked out for 5 hours or more a day and were sequestered on a ranch somewhere with personal trainers who appear as if they got their training from the Spanish Inquisition or any other place of torture. They appear to enjoy seeing their clients suffer untold pain to race for the biggest weight loss of the week.

Susan Powter tells us that the body can only process 2 lbs a week of fat so guess what folks who lose 7-10 lbs a week are losing? Muscle tissue, bone mass and organ meat. Not exactly what I would call healthy.

How pray-tell, are these folks going to have a chance to keep the weight off when they get back into the real world and have to do other things besides starve and work out for hours a day? And will the sore muscles and somewhat sadistic personal trainers render them sour on exercise for life? (Studies have shown that moderate exercise is a very good thing!)

One of the "biggest losers" did take an interview a while ago and he said when he had to do real things like work, he ended up re-gaining a significant amount of weight. I suspect that's the fate of most, if not all of the folks on that show. Kind of a no brainer if you think about it. After all, if we lived in the Amazon Jungle without refrigerators, cars and fast food, we'd all be slim. And a large number of us would also be dead.

In 1900 when people worked 12 hours a day for 6 days a week and didn't have refrigerators or fast food or real tasty food (let alone time to eat it) there was little to no obesity. But the average lifespan was 45 years. Now despite the "deadly obesity epidemic" our lifespan is 78 -80 years. Big difference.

Does anyone care about the health of these people which probably is seriously threatened by this type of regime suffered on "The Biggest Loser" show?

Are people aware of the fact that people occasionally die on these reality weight loss /get fit shows?

For example, a gastric bypass patient was picked to be in the Fit TV show "Ship out and Shape Out" She was a pretty lady named Jennifer who had a kindly sweet personality. She had lost a bunch of weight with her surgery but was still over 200 lbs and wanted to lose more. Her personal trainer mentioned she had "health problems" (likely from the bypass). She did not participate in all the exercises and those she did participate in, seemed a big strain on her body. And about 6 months after the show was first aired, she died. (I found that out because when the show re-ran, they had a memorial to her in the credits).

She wasn't the only person on the show who suffered. An over 40's man almost had a heart attack on one of the hikes they took (you cannot just suddenly be fit - you have to work up to it). He got all red in the face, and half collapsed. Not surprising, he didn't show up for the reunion of the group, 3 months after the show was finished filming.

And "Ship out - Shape Out" was tame and conservative compared to the horrors they put the people through on the "Biggest Loser" show.

Maybe people watch the "Biggest Loser" show because they dream of the weight just dropping off. The same reason, people ignore all the friends who regained or got sick or died with weight loss surgery, ignore the warnings in release forms and hop on the table to have a gastric bypass. They only think about that first year when the weight is automatically dropping off because they are too injured and sick inside to be able to eat much or have an appetite. They don't seem to think about what the 2nd and 3rd year will bring or the 20th year when they might have re-gained most of their weight but still have another set of co morbidities from the weight loss surgery. I've talked to many older post ops who say they are taking more meds now than they did when they were very overweight. But 200,000 people have this surgery yearly (in the USA), seemingly ignoring all the evidence (and the non guarantees from the medical profession about what life with weight loss surgery will really be like or even the expectations of retained weight loss which are not much better than dieting).

I think it's the same thing which inspires people to watch the "Biggest Loser" show. It's a rationalization that a daydream is reality. A rationalization that becomes so strong in some that they are willing to play Russian Roulette with their lives and future rather than face reality. A bit like the movie, "The Matrix" where the reality of humans lying in a bed, having their energy slowly zapped by a machine was totally different from the world the machine created for their brains and how some individuals, when faced with the reality of a somewhat, desolate world, willingly became prisoners of the machine again. "The Matrix" although having a less than great, plot line, was so deep in meaning and significance as to our generation that I've found several books written about it.

Reality shows which are not really reality. Time Magazine said it well. But when that non reality becomes a motivation for people to take insane chances with their lives, it's time to stop and re-think the whole schema.

Maybe the "Biggest Loser" is not the group of people thus tortured for several months for the delight of the TV audience or even the show itself but those who watch the show and begin to believe the myths spewed out therein.

Not a new thing of course. Hitler stated "Say something over and over and people will begin to believe it" Doubtlessly, he would have loved modern communications and manipulative media like TV - scary to think of what he would have done with these powerful tools.