Surgeons pressured based on flawed studies 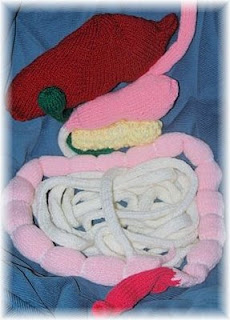 Based on a couple of studies suggesting increased lifespan in weight loss surgery patients, those studies being short and inconclusive and not randomized and flawed, surgeons are being pressured to do gastric bypass surgery on people of all ages. A recent news article quotes one surgeon who was being pressured to operate on people as old as 78 years old (which is ridiculous because a lot of evidence suggests that doing gastric bypass on anyone over 60 is a risky deal and may SHORTEN - not lengthen lifespan).

"I am being asked to operate on 78-year-olds with co-morbidities of heart disease and diabetes," said Dr. Edward H. Phillips, executive vice chairman of the Department of Surgery and a surgeon at the Center for Weight Loss at Cedars-Sinai Medical Center in Los Angeles. Phillips questions whether these patients will benefit..."

"So, while it is obvious a 30-year-old will benefit, at what age is too old?" he asked.

Problem being it's NOT obvious at all that a 30 year old will even benefit from losing weight without surgery, let alone having a surgery which causes vitamin deficiencies for life and more ...

***Gastric surgery for weight loss causes nutritional deficiency in nearly 100% of individuals who have it done. The most common deficiencies are Vitamin B12, Iron, Calcium, Magnesium, Carotene (beta-carotene and other carotene vitamins) and potassium.****

All the studies I know about which suggested an increased lifespan for gastric bypass patients were flawed. One study (David Flum (Study title: The Impact of Bariatric Surgery on Patient Survival: A Population-Based Study)
compared 62,000 healthy fat people who entered the hospital for gastric bypass to 3000 seriously ill fat people who were hospitalized for other reasons (had he compared the gastric bypass patients to 3000 seriously ill slim people hospitalized for other reasons, I'm sure he would have found that the healthy fat people outlived the seriously ill slim people also). This same study was the one which found that the real death rate of gastric bypass patients was 2 in 100 or 1 in 50 died within 30 days of surgery and another 2-6 percent (depending on age) died within the first year. Did he average those deaths in with results? Probably not.

And the Utah study which compared 9500 gastric bypass patients with 9600 "seriously fat people" who applied for drivers licenses and found a "40 percent less death rate among gastric bypass patients". (Long-Term Mortality after Gastric Bypass Surgery Ted D. Adams, Ph.D., M.P.H., Richard E. Gress, M.A., Sherman C. Smith, M.D., R. Chad Halverson, M.D., Steven C. Simper, M.D., Wayne D. Rosamond, Ph.D., Michael J. LaMonte, Ph.D., M.P.H., Antoinette M. Stroup, Ph.D., and Steven C. Hunt, PhD.) In this study, there were several flaws. First of all, most people lie by a lot on their drivers' licenses about their weight... and the heavier they are, the more they shave off. In a survey I did of fat people, I found most over 300 lbs were putting their weight as 100 lbs less than they really weighed which means finding people of "comparable weight" based on driver's license weights, weren't really comparable because actually, they were likely much heavier than their WLS counterparts.

The worst thing wrong with this study is the way it LOOKS i.e. 40 percent more deaths sounds impressive until one looks at the facts.... there were 57 deaths in the control group (the non surgical) and 37 deaths in the gastric bypass patients so that is only 20 deaths more in the controls and they did NOT count the gastric bypass patients who died immediately after surgery or within the first year after surgery. They took them at the 5 year point when those who probably survived the first few years were going to survive. Had they taken them (as they should have done) right after surgery, I'm certain they would have found that the mortality rate was much higher among gastric bypass patients. They also did not count long term patients either - only 5 years post surgery which is before the co morbidities like anemia etc show up in many patients.

Definitely not a study to "prove" anything about the lifespan of gastric bypass patients and nothing to justify doing surgery on elderly with heart conditions etc.

And so far, there isn't even any "proof" that losing weight will prolong lifespan. Two studies of over 50 year olds, all obese - one group which dieted and the other which maintained their current weight, found that the dieters had a 50 percent greater chance of heart attack than the controls. For as many studies that suggest that obesity is "dangerous" there are an equal number of studies which suggest that obesity alone does not pose co morbidities and co morbidities are either contingent on lifestyle or "serendipity".

Even the release form for gastric bypass warns about this:

It's time Americans realized that anything in the mass media is for "entertainment only" and NOT a good source of information, especially for making medical decisions.

art credit: art in photo by Char - used with permission
Posted by Sue Joan at 2:50 PM No comments:

diabetes but what type? 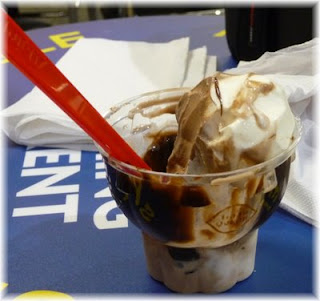 What is the cause of type 2 diabetes? We all can answer that by rote much as we can recite TV ads for cereals from the 1960's. "being fat and/or gaining weight and bad eating habits".

Well, then, what causes type 1 diabetes? "that's when your immune system or something else destroys cells in your pancreas".

Where things seem to get confusing is how they distinguish between two. I used to think it was something like "if your father had diabetes or your mother or your grandmother, it's type 2 because type 1 is obviously not hereditary". Or maybe if you walk into the doctor and have a blood sugar reading of 1000, at the first reading, you might have type 1. Or if you are a kid, of course, it's type 1 because kids don't get type 2 (that's why it's called "adult onset diabetes" dummy - didn't you know that from the 1950's?... ok I'm being sarcastic here... I admit it. My bad)

But a recent Discovery Health CME was extremely confusing. A young ballerina (15 years old) came in with a blood sugar reading of 400. Now _that_ seems to suggest she has a partially functioning pancreas, doesn't it, especially since her mother also has diabetes also...which suggests a genetic factor, very typical of type 2 diabetes or insulin resistance, right?

But it appears that because both the mother and daughter are very slim and eat healthy etc (well supposedly - many slim people actually do NOT eat healthy - they just "get away" with eating poorly), and the girl is a kid (15 years old) it must be type 1 diabetes, decides the doctor and puts this kid on 7 shots of insulin a day (and 8 pricks).

Later, you see the kid with some friends, one of whom asks "but you look so good, how come you have diabetes?"

"no no no no no no no!" exclaims the young girl, "I don't have that kind of diabetes that fat people get!" (she wrinkles her nose in disgust as she utters the words "fat people".) "I have type 1 diabetes!" Listening to this, I cringed.

And I wonder. Did they ever try her on metformin? Did it ever occur to her medical providers that insulin resistance which is a gene, can occur in a slim person also? Is it worth it to these people to not "brand" them as "fat" or "formerly fat"? Obviously if metformin worked, wouldn't that be a whole lot better quality of life for the young girl to take a couple of pills a day than to take 7 shots of insulin throughout the day and test her sugar "umpteen" times? Also, metformin is a better treatment - she's essentially being treated the same way they treated diabetics in the '50's and '60's.

I have a friend who is slim. But his mother was extremely overweight. So he noticed the usual signs of diabetes - thirsty, and so forth. He went to the doctor and because of his age and girth, got diagnosed with type I diabetes (and his mother by the way, had diabetes type 2). Was on insulin for several years until some smart doctor decided to try metformin and now, he only takes one insulin shot a day and pills which is a whole lot nicer.

My question to medical providers - are you really in tune with the fact that a slim person can have type 2 diabetes because it's essentially a genetic disorder? Even if they are not fat (because fat is largely genetic as well)? Or are you putting young kids through a horrible medical regimen just to assure their parents and/or them that they do not have the "fat person" kind of diabetes?

Fat phobia hurts everyone - even slim people. And that is why we _all_ have to fight it.

If you come in with a blood sugar level of less than 800, even if you are a kid or slim, ask your medical provider to try metformin (the pills) first. Because 33 percent of type 2 diabetics are slim - never were fat in their lives - and those are the ones we know about. How many more type 2 diabetics who were misdiagnosed because they were young and/or slim are there around?
Posted by Sue Joan at 3:51 AM 7 comments: