Maestro system - a v-bloc by any other name is still a v-bloc? :) 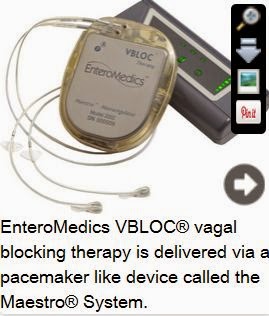 Entermedics has re-introduced in 2015, a device for weight loss which sounded good in 2008 and 2010 but did not produce good weight loss and was not non invasive as was first thought.  I researched this device in 2008 and 2010 and wrote a blog on it which I've updated to reflect the new device (which of course, isn't really new but perhaps they feel the public won't remember the last times around and they are probably right about this!).  You can read the details by clicking here (Vbloc blog)

This V-bloc has a new name ("The Maestro System") but turns out to be hauntingly similar to the device introduced in 2005 and 2010 and by the way, seems by same weight loss surgery surgeon who advocated it the last time(s) around.  I have talked to him on the phone and he is a fine man (and likely a good doctor) but I guess I'm wondering if it didn't work the last two times around, why should things be different now?  I guess we have to wait and see on this! :)
Posted by Sue Joan at 2:46 PM 2 comments: