The TOGA procedure - new hope for weight loss surgery or ?

A recent announcement stated that the UK had done 450 TOGA procedures for treating obesity.

The TOGA procedure offers an "incision-less" weight loss surgery. What is done is basically stapling the stomach from the inside (a surgical instrument is inserted through the mouth).

American surgeons have appeared to not have greeted this procedure with the same enthusiasm as those in the UK.

Click here to see an animation of the TOGA procedure. 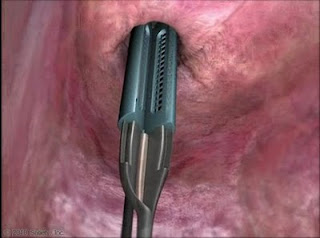 A surgeon's description of "minimally invasive" can be misleading to patients. They simply mean no incision. They do not mean the surgery is lightweight or not complex. This procedure calls for stapling the stomach from the inside into a narrow sleeve and step two is narrowing the lower end of the sleeve so food doesn't go through well. This is supposed to cause the patient to feel full with a lot less food.

It's interesting to note that all the procedures and medications are aimed at cutting appetite but since when do people only eat when they are hungry? The type of appetite we mostly have, is in the head and not fixed by feeling full in the tummy.... which may explain why even the more complex procedures are somewhat ineffective in a number of patients.

As the websites about the TOGA do not seem to be recently updated, it seems that the TOGA may not have become popular in the USA yet, and one wonders whether the weight loss results were less than expected or whether there were a lot of complications in the American trials.

Even if the TOGA holds better than the Rose or the StomaPhX, it may cause a lot of discomfort for the patient. In fact, patients complained of a lot of pain with both the Stomaphx and the Rose procedures but not much additional weight loss. And with the Rose and the stomaphx, they had problems with the staples or clips pulling out after a year or so. The tissue inside the stomach is very soft tissue, so it makes sense that staples or clips would not hold well.

Apparently a study in 2008 did not result in the weight losses claimed by the manufacturer. Also as you notice in the quote, even in a small number of patients (6), researchers observed in some cases "Partially stapled sleeves". In other words, in at least a couple of the members of the cohort, the staples had already begun pulling out.

There were no complications; all but 2 instances of procedure-related adverse effects (nausea, vomiting, pain, dysphagia, pharyngitis) resolved within 5 days and none were serious. The most recent follow-up visits (endoscopy at 3 or 6 months) showed persistent full or partial stapled sleeves in all patients. Weight loss averaged 17.5 lb at 1 month and 24.7 lb at 3 months after treatment (excessive weight loss [EWL], 14.9% and 20.5% at the respective time points). At 6 months, average weight loss was 31.1 lb and EWL was 24.9% for 6 patients followed up so far.

In reading about this procedure, I somehow am reminded of the title of a book that Susan Powter wrote --- "STOP THE INSANITY". 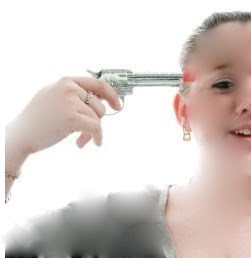 A study which followed 400 gastric bypass patients, found that the average BMI at the 2 year point, was 32, still obese. The study was conducted at the Medical College of Georgia.

Explaining that the size and mass of the patients' hearts had greatly decreased, Litwin stated this suggested that their hearts were not working as hard to pump blood and therefore, less "stressed" than before surgery. Dr Litwin also said that the hearts of the patients were more normal size.

The problems with this theory are many - first, the heart is a muscle and working it is not a bad thing which is why many overweight people have strong hearts. Second, what caused the reduction of heart tissue? Was it less stress due to a lower weight (which remember, was for most patients, still in the "obese" range) - or was it that in the first year or so, gastric bypass patients take in very little food (300-500 calories day, thus causing a very rapid weight loss) and what their bodies can no longer get from food, is leeched from their bodies. Protein and iron, both poorly digested in gastricbypass patients especially in the post surgery stage, can be obtained from the heart tissue and this would much more likely explain the loss of heart mass however, loss in this manner would not be a good thing. On the contrary. It is this type of tissue loss which is suspected to be a factor in the heart attacks observed in 25% of anorexics.

I have known several gastric bypass patients to come down with heart disease after surgery (some require a pacemaker for example).

I notice in the article they quote Dr Lee Kaplan saying that only 1 percent of those qualified for weight loss surgery get it. But I'm wondering if that quote was taken out of context because in the Self Magazine article, Dr Kaplan said:

*** "Because it's risky, it's only appropriate for a tiny fraction of people with obesity—the sickest 1 to 2 percent. The idea that all obese people should get [WLS] surgery is insane."
Lee Kaplan, M.D., director of the Massachusetts General Hospital Weight Center in Boston in "Self MAGAZINE: 'The Miracle Weight Loss that isn't' AUG 2008 ***

The article points out that the risk numbers, cholesterol and blood pressure are down on the gastric bypass patients. These numbers also go down in people with terminal cancer. However, I doubt that cancer patients are at lower risk of coronary disease.

Finally, they emphasized the diabetes "cure" (really a remission not a cure) which has been observed in 72% of patients at the 2 year point, however, what they don't mention is that the studies have found that by the ten year post op point, most cases of diabetes have returned.

Whatever the case, it seems like the media is using this study to sell the surgery than anything else (as someone on one of my listserves pointed out).
Posted by Sue Joan at 4:03 AM No comments: