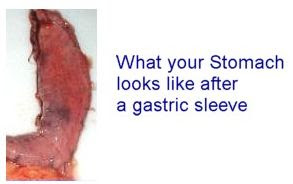 If you look at this blog, you will see the glowing report from a new op on the gastric sleeve. She didn't want the gastric bypass (admits she was 'barely qualified' for WLS by US standards) because she felt it was "too drastic". But although things are rearranged in the gastric bypass, nothing is taken out of the body.

Not true of the sleeve - this drastic surgery calls for the removal of 90 percent or more of the stomach, creating a Frankensteinian pouch which holds only a couple of ounces of food.

The new op goes on to credit her normal weight to the sleeve and the reduction of ghrelin in her blood not realizing that her lack of hunger now, is simply that her stomach is going through a healing process. Human appetite is NOT controlled by one hormone, scientists will tell us and I would ask, how many people are fat because they only eat when hungry anyway?

That ghrelin has anything to do with appetite is merely a theory however, there is a body of evidence suggesting that those with less ghrelin in the system also have less growth hormone and this can cause premature aging. That, they don't tell you in WLS seminars.

Back to the new op, she runs a couple of hours a day and has done a triathlon or two. Since she is working out like those on the "Biggest Loser" she has lost weight like they do. But when she's all healed and finds her lack of a stomach to be more of a liability than an asset, like when eating healthy food like veggies with bulk is difficult which makes many tend toward foods which go down more comfortably like milkshakes, then she will likely leave her glowing testimonials up and not warn newbies of the other side of the story which she has regrettably discovered - all too late.

Some of us call this the "conspiracy of silence", the lack of negative information about weight loss surgery which leads 200,000 people a year to get cut without really knowing what the repercussions might be.

Sadly, the sleeve is viewed as less invasive than the gastric bypass and this is so not true. Since most folks know someone who has had a gastric bypass with a bad result (the least of which was regain), many are now choosing the new guy on the block, the sleeve, as the weight loss surgery panacea.

Still looking for the easy way out. But like the perfect solution, the easy way out doesn't exist and grabbing of something which is being sold like used cars, might make things a lot worse.

Remember even the surgeons admit, and most older op WLS patients will tell you that....

Overweight and Obese Kids eat Less than their slim peers 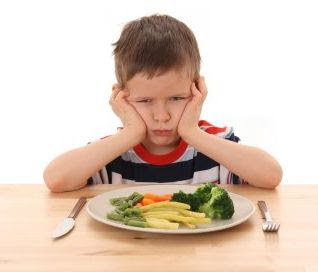 Totally destroying the image of the fat kid overeating which has been so popular on the American scene, a new study out of Canada found that actually overweight and obese kids ate less calories than their slimmer peers (those of us who have fought a weight issue all of our lives are familiar with this one, having had to watch slim folks down huge portions of pizza while we munch on a carrot!).

The researchers studied over 12000 kids aged 1-17 and had a mathematical formula to adjust for self reporting inaccuracies (parents reported intake for kids 5 and under).

The study was reported on at the Pediatric Academic Sciences 2010 annual meeting. (Note: a sign-in may be required to read this article on Medscape - registrations are free)

Isn't it time we kill the TV stereotypes and accept that people who become obese may have strong genetic and physical reasons for their size?
Posted by Sue Joan at 6:19 PM 2 comments: