And another revolutionary new surgery for obesity... or is it? 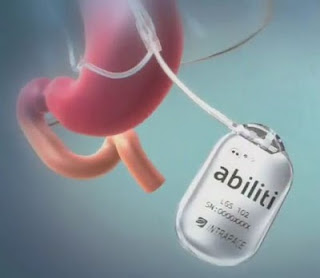 A new device, they continued, recommended for clinically obese people (BMI 35-55) fools you into thinking you are full ... yada yada, yada.

Their poster kid, a young man who lost 20 lbs with the device had "just tried everything" to lose weight and nothing worked until this doctor came along (was the doctor riding a white horse?) with the stomach pacer. The young man lost 22 lbs with it. (OK, all together now... "W-O-W") He's a mail carrier in Germany and 20 years old (one wonders if he had to lose weight at all except to perhaps get a set of washboard abs and "P90X" might have done that more effectively and without surgery).

The British Health Service has approved this device and it's being sold across the European Union although the news articles admitted that none had been placed commercially yet.

The problem here, is the idea of a gastric pacer is neither new nor effective for the population for whom they are suggesting it and the fact that an already physically fit 20 year old lost 22 lbs after it was implanted, might be less than impressive to both patients and/or the American surgeons who were excited about the Transneuronix version in the early 2000's and who personally saw the abysmal failure of the device to be either effective OR safe in the American trials.

There is a new wrinkle to this pacer and that is that it's invasive, much more so than the lap band. How? Because it has two leads, one of which lies on the stomach like the older pacer and another of which is inserted though a hole made in the soft stomach tissue into the stomach (it's supposed to detect when food comes into the stomach and then, it sends a message to the other lead which starts the vibration). This brings in the possibility of leaks and sepsis later on. One does not have to leak much stomach contents into the abdominal cavity to cause serious problems! In contrast, the lap band does not require a hole into the interior of the stomach.

Obviously, some well meaning surgeons are unaware of the hefty lawsuit suffered by Transneuronix after one individual had a nightmarish experience with the older (less invasive) pacer. The surgeons who did not hear about the people involved in the American trials, for whom the pacer was uncomfortable (it vibrated throughout their arms) and ineffective (they lost 5-20 lbs with it), some of whom experienced complications like the pacer traveling to other places in the body and all of whom were revised to gastric bypass or lap band. When the pacer failed totally, it was not headline news as were the announcements of it or the adverts for folks for the trials. In fact, the trials failing didn't hit the news at all. The only reason I know about it, is I was following several of the trials and in touch with some of the participants and I know the person who ended up suing.

If you were unimpressed by the poster kid featured in the news, there is another poster kid on the Abiliti website, another young man - a fire fighter. He lost an "impressive" 15 lbs with the device and from his photo where he looks very slim, he also, may not have been fat to begin with and yet, they are recommending this for clinically obese folks?

Sadly, there have been 65 patients who have had these implanted in 2 trials in the United States, however interestingly enough, in searching the web today, I could find no articles or announcement of the trials nor mention of the surgeons involved. As an MSNBC article stated:

So far, about 65 patients in two studies have received the device from U.S. pacemaker manufacturer Intrapace. Only about half of those have had the pacemaker for at least a year, and most lost about 20 percent of their weight and kept it off.

I really hate to see a repeat of history or worse. For it is said that "who does not study history is doomed to repeat it" but then when our news services do not totally report the story, it makes it hard to study history.

"Conspiracy? No conspiracy - only businessmen doing what businessmen do best, selling product" (Bernie Goldberg,a former network anchor in his book "BIAS") Only this isn't a car or a piece of clothing - this has the potential to hurt humans.
Posted by Sue Joan at 12:46 PM 3 comments: