Update on second person to have brain surgery for weight loss

Carol Poe, 60 years old, had had a "stomach stapling" (probably a VBG) and later was "revised" to a gastric bypass. Her original weight was almost 500 lbs - she's 5'2" and she still weighed 287 lbs when she went in to surgery. Apparently neither of the weight loss surgeries she had, had "worked" and of course, dieting hasn't worked either so Poe happily offered herself as a guinea pig for a new brain surgery which is supposed to kill the appetite. Neurosurgeon, Dr Don Whiting of West Virginia University is the one testing the procedure.

This surgery calls for two deep probes to be placed in her brain and 2 pace makers to be placed in her chest. The pace makers send out electrical currents to the probes and this supposedly kills her appetite. Her surgery lasted 3 hours and she was awake for the entire thing because when they place the probes they have to make sure they don't injure something else or take away any of her abilities.

She appeared on the Oprah show today (the show was originally aired in April) and said that after 2 months, she had lost a whopping (NOT) 11 lbs. She told Oprah that she didn't have any cravings and that she was eating a more healthy diet and that she is now going to the gym.

It should be noted that just going to the gym for two months could have explained the weight loss and that if she's only lost 11 lbs in two months even with going to the gym, she's not really cut down her food intake very much which suggests the surgery may not be cutting the appetite the way they hoped it would.

She's Whiting's second patient and he wants to do another soon. One of the requirements to be a guinea pig for this surgery, is to have had a gastric bypass (which apparently failed to cause a good weight loss), Whiting told the press in April. Don said he has to make sure the surgery is effective and safe.

Why Oprah decided to give this procedure her seal of approval by having the patient on her show (with Dr Oz) is unknown. But she made it clear on her show that she had no plans of having this brain surgery.

Carol Poe looks like she's survived the surgery well (Dr Whiting stated that there is a 1 in 100 chance of stroke or even death with this surgery) and she told Oprah that the loss of the 11 lbs has made it easier for her to move around and mow her grass. But likely, rather than the 11 lbs, it's been her trips to the gym which have made the difference in her ability to move better. Minus 11 lbs she still weighs 276 lbs at 5'2".

Dr Whiting expects to get FDA approval for this procedure in the next 2 years however, if Carol's lack of weight loss is any indicator, his path for approval may not be easy.

A similar surgery is used for Parkinson's disease but of course, long term repercussions with the new weight loss surgery could include the pacemakers moving around in the body or forming abscesses, brain damage from the flow of electricity into the brain and more.
Posted by Sue Joan at 5:29 PM 6 comments:

Weight Loss surgery death rates down? No evidence of this! 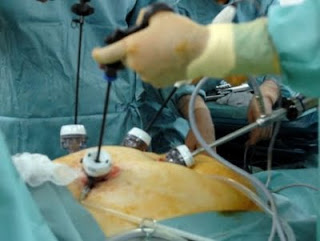 An article on aol news with the headline of "Obesity Surgery death rates low" reads:

-Obese, but worried that surgery for it might kill you? The risk of that has dropped dramatically, and now is no greater than for having a gall bladder out, a hip replaced or most other major operations, new research shows.

Sounds good, doesn't it? Now you can have a gastric bypass and have it only be as risky as gall bladder surgery i.e. 1 death in 7000 surgeries.

But wait! First of all the study didn't exactly say that at all.

The finding of the study, another Dr David Flum study to be published in the NEJ on August 13th, which looked at the medical records of 3,412 gastric bypass patients and 1,198 given stomach bands i.e. adjustable lap band, was that there were 3 deaths in 1000 patients so that's still _a lot_ more risky than gall bladder surgery.

The "less deaths now" are attributed to "newer methods" and lap surgery. However, if you average the very LOW death rate of the adjustable lap band surgery in with gastric bypass, that's far more likely where the lower death rate figures come from.

That is the death rate on adjustable lap band surgery is 1 in 7000 or the same as a gall bladder surgery. And I sincerely doubt the death rate on gastric bypass has been reduced that much in the 6 years since Flum's other study (report delivered to the College of surgeons in Oct 21, 2003.[Study title: The Impact of Bariatric Surgery on Patient Survival: A Population-Based Study]) which was never formally published and which concluded by comparing desperately ill fat people hospitalized for other reasons than WLS, that even with such a high death rate it was slightly more risky to be fat than to have a gastric bypass.

It's called "cooking the books" and it's easy to see how they arrived at those figures. In 1198 lap bands, there were likely no deaths! And in 3412 gastric bypasses, there were likely 68 deaths within 30 days of surgery, however they probably took the table death figure which is 1 percent so that's 34 deaths.

Now lump them all together and that's 34 deaths in 4610 WLS surgeries or 8 deaths in 1000 surgeries. That's still more than the 3 per 1000 surgeries they are claiming so more cooking must have occurred. Simply, I have read nothing about the study being randomized and greatly suspect it was not randomized which means they could pick and choose the members of the cohort. That is, at the 10 hospitals they studied, there were likely far more patients than 4610 who had WLS but many were not included in the study for this or that reason.

Anyway, you get the gist. The gastric bypass isn't likely, any safer than it was in Dr Flum's study, 6 years ago. They just uh..re-computed because the results from the 2003 study which studied 62,000 cases of gastric bypass done in one hospital, didn't look so good (2 percent death rate within 30 days).

I would suggest those who question, go to Dr Simpson's website and listen to the part of his online seminar about why he prefers the lap band to the gastric bypass and duodenal switch.
Posted by Sue Joan at 5:34 PM 2 comments: