Gastric bypass in teens - why not? 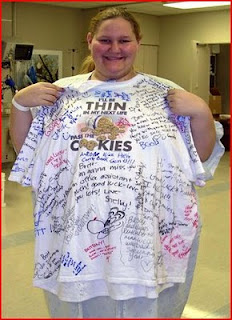 A recent article in the LA Times quoted a Dr Brandt as saying, about overweight teens that:

"But these kids are dying! We’ve created something in our society we have to undo."

Dr Brandt believes in doing the gastric bypass on young kids (even as young as 14 years old) despite the fact that this surgery (based on a procedure for ulcers invented in 1888 by Theodore Billroth and no longer done for ulcers) bypasses not only most of the stomach but also the first segment of small bowel where most vitamins are digested.

Brandt expressed "doubt" about the much safer adjustable lap band because:

"The band is a human-made device that could be in place for a lifetime, and as such carries a risk of scarring and malfunction"

I wonder why Dr Brandt thinks it's better to cut the stomach into two pieces and the small bowel into 3 pieces and reconnect in such a way which is causing 3 world vitamin deficiency diseases in 1st world kids. (ref: Bariatric Beriberi by Charlotte Gollobin1 and William Y Marcus, Obesity Surgery, Volume 12, Number 3 / June, 2002, Pages 309-311)

Not withstanding placing 300-400 staples into the digestive tract which is what happens in the gastric bypass - the staples, unlike the lap band, are not removable!

According to the Fresno Bee expose in 2001, patients do die from gastric bypass and not only the 2 percent who die within a month of surgery(REF: Dr David Flum - death rate 2 percent within 30 days of surgery from 62,000 patients: report delivered to the College of surgeons in Oct 21, 2003.[Study title: The Impact of Bariatric Surgery on Patient Survival: A Population-Based Study])

According to some, many more patients die than admitted by either providers or the media. The Fresno Bee wrote:

"the deaths, by and large, do not occur in the operating room, or in the hours immediately following surgery. They happen in the days, weeks and months after surgery, when patients return home and find themselves coming apart from the inside -- sometimes leaking from the abdomen."

And this is better than the lap band which calls for no cutting up of the stomach or cutting up and bypassing of the small bowel and is fully reversible? Which delivers a similar weight loss to the bypass at the 3 year post op point also?

I am thinking of the lady who was down to 85 lbs and got her gastric bypass undone. A year later, she is still slim but has color back in her face, is healthy and like so many others who got their surgery undone, she feels her life began the day she woke up from reversal surgery.

Frankly, I sometimes wonder if the average WLS provider's $250,000 - $500,000 a year salary has anything to do with the zeal of some to rush children into surgery modifying the digestive system for life or perhaps the fact that gastric bypass surgeons don't generally, have to do the follow up on gastric bypass like they do on the lap band - gastric bypass follow-up is typically, done by the emergency rooms and gastro-enterologists, many of the latter who are very against these procedures.

And these surgeons are saying we should allow this on 14 year old kids?

I keep remembering the 22 year old young man who was featured in a news article a few years ago - he'd had bypass surgery at the age of 18. At the age of 22, he was at his ideal weight and was pictured smiling, sitting on a tractor. The article also said that his bones were as porous as an 80 year old's... at the age of 22!

Calcium is one of the nutrients which gastric bypass patients can no longer digest - the calcium which is typically building up the bones of young folks will now be leeched from their bones after their WLS. They can take calcium supplements but we only digest about 2 percent of these and the rest is excreted and can cause kidney stones among other things.

That's the side you don't read in the news or hear about in seminars.

Hopefully parents will put a stop to this because kids only think about one thing and that is "fitting in", but teens I've seen post op with the gastric bypass, sit in the TV studio unsmiling because I'm sure no one told them about the spontaneous vomiting perhaps sitting in a restaurant with their friends (I'm sure this is less socially acceptable than being fat) or the myriad of foods they no longer can tolerate, nor being knocked on their butt after doing something so innocent as eating a piece of their birthday cake.

A recent photo of a "gastric bypass birthday cake" I saw, had the writing on the cake "sorry you cannot have any of this".

And I'm sure no one ever told them about the fact that they might get seizures from the vitamin deficiencies caused by the surgery (seizures are definitely not socially acceptable among teens) or have to sit for hours in the oncology section of the hospital getting infused iron peridically or having irratic blood sugar levels from reactive hypoglycemia (unlike diabetes, there is no medication for that condition).

I wonder if anyone warned these teens that when they dare to eat something like a breast of chicken and don't take an hour to eat it slowly, it might get stuck in the stoma (opening of the pouch stomach into the small bowel) and hurt like heck for the next two hours until it either passes or they have to be scoped to make it pass.

Maybe that's why at least some of them are depressed after surgery. Suddenly a young healthy teen enjoying life, has a serious disability to contend with. Isn't this a bit much to burden anyone with, let alone a person who is supposed to be in the "carefree years"?

"You don't really know what the outcome is," said Dr. Edward Livingston, chairman of gastrointestinal and endocrine surgery at the University of Texas Southwestern Medical Center at Dallas. "You talk about the benefit being that it prevents kids from terrible chronic disease later in life. But some of them are going to regain weight. Some of them are going to have long-term complications and we won’t find out until later."

Dr Livingston has been one of the bariatric surgeons who speaks out about the drawbacks of the gastric bypass even for adults.

His study of 800 gastric bypass patients a few years ago, found a high percentage of repercussions and he wrote for Self Magazine in 2001:

"By doing this surgery, you're creating a medical disease in the body. Before you expose someone to that risk, you have to be absolutely sure that you are treating an illness which is equal to or greater than the one you are creating."
(Dr Edward Livingston, bariatric surgeon in Self Magazine, 4-2001)

Brittany Caesar, who had a gastric bypass 6 years ago and now weighs 170 lbs, described sitting down at her favorite lunch of two cheeseburgers, two orders of fries and a Coke and hearing a friend say to her "Why do you eat so much? It's not normal". Caesar fled to the washroom determined to lose weight, feeling very wounded by this comment. "Food was my best friend," she told reporters, adding that her whole family was fat. Caesar was over 400 lbs on the day she had her weight loss surgery. Now she is 20 years old and 175 lbs, but the article did not say whether she had had repercussions or has osteoporosis or osteopenia.

Are the possible repercussions worth the lower weight?

The RNY trades one disease for another: it trades obesity for malabsorption. By re-arranging your guts you sometimes have severe side effects, and can have long-term problems such as iron deficiency anemia, calcium deficiency leading to osteoporosis. (Dr Terry Simpson, MD, WLS surgeon)

Especially as in Dr Simpson's almost 30 years of doing these WLS procedures, he found that it was true of all of his patients, regardless of which procedure that:

"Because it's risky, it's only appropriate for a tiny fraction of people with obesity—the sickest 1 to 2 percent. The idea that all obese people should get [WLS] surgery is insane." Lee Kaplan, M.D., director of the Massachusetts General Hospital Weight Center in Boston in "Self MAGAZINE: 'The Miracle Weight Loss that isn't' AUG 2008

The article in "Self" detailed some long term patients, many of whom were not happy campers several years after surgery.

If we are really, worried about getting our children healthier, Dr Pattie Thomas, PhD, a scientist, suggests some good ways of doing so in her article, "7 Better Ways to Help America's children than Making Fat Kids Skinnier"
Posted by Sue Joan at 2:40 AM 1 comment: