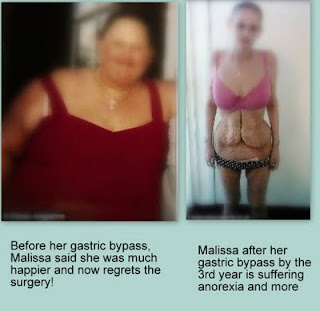 Malissa Jones of the UK first made the news in 2008 when she became the youngest person to have a gastric bypass in her country. At the time, she weighed over 400 lbs and by her own admission, had a taste for candy and not the greatest food choices. (She told the news, she's consumed 10 chocolate bars in a day!). Typical teenager but with her genetics this type of teen eating did not work. So she had become very obese. Malissa complained about being teased and bullied in school but she apparently had some health problems also. She had trouble breathing and when she was 15, she went to the ER with chest pains which is why the NHS decided to do a gastric bypass on her when she was 17 years old. Typically they don't do bariatric surgery on anyone younger than 18 years old

Her surgery did not initially go easily for her. She was in intensive care for 36 hours but she did survive and began to enjoy her honeymoon year.

In February 2009, she was again interviewed. In a blog which reprinted a news article, now no longer available, it was reported that she had lost over 200 lbs and said that this surgery had saved her life. She weighed around 196 lbs and took a size 14, a great improvement over the size 28 she used to take. She talked about night clubbing and discovering a whole new world. "I've had a lot more boyfriends because I feel much more attractive and confident.", she told the news reporter. She mentioned that she was saving up to have the loose skin removed in a private surgery (it was not covered by the NHS).

But sadly, Camelot wasn't going to last for her.

By December 2009, apparently been unable to save up for the $40K surgery she required (Lower body lift, tummy tuck etc) to remove 28 lbs of loose skin which remained after her quick weight loss, she was not a very happy camper. Life continued on a downward trend, when she became pregnant at the age of 20 but they had to take the baby prematurely because they feared that carrying fullterm might be too risky for Malissa. Henry, a little boy did not survive.

Malissa recently made the news again. She now has been diagnosed anorexic - she weighs only 112 lbs (she's 5'8") and is unable to eat more than 300 calories a day. The news stated she was afraid to eat but she said in addition to being terrified of regaining, she suffers pain and sick stomachs when she tries to eat more food.

There are a number of gastric bypass patients I've met like this - who are unable to eat a couple of years after surgery. This inability to eat is sometimes combined with a phobia of food in general as is the case with Malissa.

One might ask why NHS doesn't give her a reversal and perhaps they have done that, but a reversal won't help the fear of food she has developed since her surgery. Again the NHS is worried for her life. She's much too young to die but this time around there is no surgery which can save her life except intensive psychotherapy.

This is not as unusual a case as providers would like us to think it is. I've actually, met quite a few patients who suffer from something similar to Malissa.

Dr Jen Berman,a Los Angeles psychotherapist and an expert on eating disorders, has counseled many gastric bypass patients over the years. She told the news media that some patients have developed eating disorders and are afraid that if they eat too much, they will be sick.

SO Malissa Jones isn't alone in her food fears, but her road back to health will be a long lonely one, and much harder to trod than it would be had she remained overweight.

Definitely a case (one of many) when the cure is far worse than the original disorder.
Posted by Sue Joan at 4:11 AM 7 comments:

bariatric surgery - neither safe nor effective? 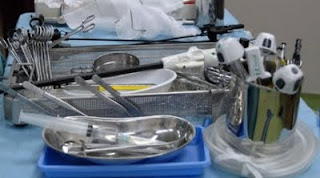 Even bariatric surgeons admit that long intestinal bypasses are associated with liver and kidney failure on the long term.

So what is this saying... if you have a procedure which destroys your ability to digest vitamins and cripples one of the most important organ systems in your body, you might lose a lot of weight in the first year? You can do that with cancer also - without surgery even. :(

The last sentence is interesting - the lap banding was the least effective in initial weight loss but, they admitted, delivered the least amount of adverse repercussions. That being said, many lap banders have to have the bands removed after a few years because eventually, the constant rubbing of the band on the soft tissue of the stomach can partially destroy the stomach.

In the one study which was drawn out to 10 years post op, the Swedish Obesity Study, they found that the average BMI for all surgeries, was 35, still very obese. (New England Journal of Medicine: Volume 351:2683-2693 December 23, 2004 Number 26 Lifestyle, Diabetes, and Cardiovascular Risk Factors 10 Years after Bariatric Surgery Lars Sjostrom, M.D., Ph.D et al) Which seems to suggest that the more risky surgeries are not any more effective in the long run than the gastric banding which is a lot less risky but none of them are really effective. ("Success with weight loss surgery is 10% the surgery and 90% the patient" Dr Terry Simpson, MD and bariatric surgeon)

Bottom line, there is no shortcut and to keep the weight off everyone has to do the same thing - count calories, make mostly healthy food choices and exercise.

In the Hebrew University study they found that only 7% of gastric bypass patients could keep off all their excess weight (follow up was 6-9 years on 600 patients) and another video from a provider I recently watched, the bariatric surgeon stated that WLS of any kind does not take off all the excess weight and people should not expect to get "slim" from it.

About 5% of people who follow a program, non surgical can keep off all of their excess weight so with risky procedures which all damage the digestive tract, one only gets a 2% greater chance of keeping off all their excess weight unless they diet and exercise or unless the procedure makes a person unable to eat (cancer does that also).

I think maybe more folks should do the math. :(

Here's the abstract on that metastudy: