Fatter babies caused by estrogens in the air? 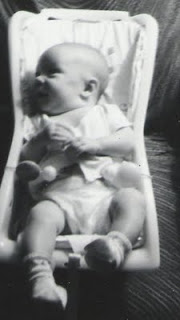 A recent Newsweek article opines that the chemicals in the air, namely the so called "phytoestrogens" may be causing today's babies to be more overweight than before.

They quote an impressive sounding statistic:

In 2006 scientists at the Harvard School of Public Health reported that the prevalence of obesity in infants under 6 months had risen 73 percent since 1980.

Pointing out that if more fast food and less exercise could explain the higher prevalence of adult obesity, it was more difficult to explain an increased incidence of obesity in a population (like babies) who don't attend movies, and don't eat fast food and were always "couch potatoes". Must be the chemicals in the air, concludes Newsweek...

I looked up the study - apparently the researcher, Matthew Gillman, MD, is also a pediatrician.

He never even mentioned chemicals in the air as a possible reason for fatter babies but rather concluded after studying "120,000 children younger than 6 years old at 14 Harvard Vanguard Medical Associates practices in eastern Massachusetts from 1980 through 2001" that solving the problem of increased baby weight might lie in:

"Avoiding smoking and excessive weight gain during pregnancy, preventing gestational diabetes, and promoting breastfeeding, all of which researchers have shown to be associated with reductions in childhood overweight."

(remember how a recent article blamed breastfeeding for _increased_ size in infants?)

While I understand that Newsweek must come up with eye catching stories almost on a daily basis which must be difficult, I think the public should realize that stories like this one are just that - eye catching - and not necessarily based on any good science.

One thing which struck me is the entire article is based on the "73 percent increase" in "infant obesity" however, is that really as impressive (or alarming) as it sounds? Probably not. For example, the study found that the incidence of overweight children had "jumped 59 percent" but then the actual numbers on overweight kids, were in 1980: 6.3 percent and in 2001: 10 percent. And this means that in 2001, 90 percent of the children were not overweight, even according to our inflated weight charts which have set the line for "overweight" to much less than it was in 1980.

Less than 3 percent more kids were found to be "overweight" in 2001, not exactly anywhere close to a significantly higher figure even with much more fast food and much less activity!

We should always be on the lookout for statistics which may sound alarming but in reality, are not.

Unfortunately I could not find the actual percentages of overweight babies but I suspect it's not that significantly higher either...

The Newsweek article goes on to cite a string of mouse and rat studies which seem to prove their "chemicals in the air = obesity" theory.

And all to the conclusion that we just might be innocent victims of weight gain, like the caged rats and mice (which also were very "under-exercised" and had a much greater exposure to food than their cousins in natural surroundings), and the fact that we burn 800 calories a day less than did our grandparents and that most of us are consuming high calorie fast foods several times a week, has nothing to do with our being somewhat larger than our grandparents. Nope, it's all the chemicals in the air!

(Forgetting of course, that the phyto-estrogens in the air have not particularly increased since the 1980's - on the contrary, with all the "green" hysteria, there are actually less pollutants like this in the air. I know, details, details... :)

While articles like this are entertaining reading (Americans love to be alarmed), we should not take them too seriously. All news media should carry a warning "for entertainment only - any resemblance to facts is purely coincidental"!
Posted by Sue Joan at 2:02 AM 2 comments:

In the Sept 2nd issue of the "New Scientist" Magazine, they have an article about gastric bypass.

The article presents the surgery in a very positive light, mentioning virtually no serious repercussions (like reactive hypoglycemia, epilepsy, B12 deficiency leading to pernicious anemia or iron deficiency anemia, ulcer, bowel obstruction etc), advocating it as a "cure" for diabetes as well as obesity:

Clearly these drastic procedures will cut your calorie intake, but here's the strange thing: the operation is much more successful than anyone could have expected. Even though they can't eat as much, people who have undergone surgery are not constantly ravenous, in stark contrast to those dieting through will power alone. It seems the gut normally secretes hormones that make us feel hungry or full, and bypass surgery ramps up production of the ones that make us feel full.

This article also includes long, pseudo scientific explanations of why this surgery "cures" diabetes and makes you feel full - they attribute it to changing gut hormones (of course, they don't say how this occurs and not surprising, they only mention a rat study or two as documentation for their claims).

I say, not surprising, because they really do not know _what_ controls appetite nor exactly what those gut hormones do. And also, the temporary lack of hunger in new ops is easily explained by the sudden difficulty in eating (food can get stuck etc) and the massive healing going on inside after the small bowel and stomach have been cut into pieces and put together in a very different manner from what nature intended.

And interestingly enough, human studies have tended to show that these surgeries are not particularly successful as for maintaining weight loss on the long run. For example:

But worse yet, a new human study found erratic blood sugar levels in most of the patients studied (clinical study) which caused them to be _ravenously hungry_ soon after meals - this study directly disproving the claim that the gastric bypass somehow changes the gut hormones to kill the appetite.

A clinical study of 63 gastric bypass patients by Mitchell Roslin and associates, has disproven this theory when it found that not only did 80 percent of the gastric bypass patients in their study suffer a RAVENOUS appetite soon after meals, but also experienced the almost uncontrollable urge to eat which did for many result in weight regain after the first year (the study went for 4 years). The researchers also found that 80 percent of the patients also had undiagnosed "glucose abnormalities" including "high blood sugar" or "low blood sugar" or both. Dr. Roslin reported on this study at the 2009 ASMBS convention, suggesting that the gastric bypass may cause a heightened insulin response due to the rapid emptying of the pouch into the small bowel.(ref: Roslin M, et al "Abnormal glucose tolerance testing following gastric bypass" Surg Obesity Related Dis 2009; 5(3 Suppl): Abstract PL-205.)

The so called "cure for diabetes" also attributed to the elusive gut hormones by this article, has only been called a "cure" in the media. Any studies which suggested that weight loss surgery got the blood sugar levels down to normal in diabetics, called it a "remission" and what long term studies we have seen (for example, the Swedish Obesity study), found that at the 10 year post op point, only 36 percent of diabetics were still "diabetes free".

Additionally, as observed in a friend of mine who was diagnosed diabetes, 16 years ago - six weeks on the Weight Watchers Momentum program reduced his sugar levels to normal also even though he only had lost 12 lbs of weight and still was significantly obese.

Any gastric bypass patient will tell you that this surgery is NOT the "easy way out" but in fact not only takes a lot of work to maintain weight loss but also to make sure one gets vitamins, supplements, B12 shots and iron infusions (which patients need as time goes on) and close medical followup required. Gastric bypass has been observed to cause some alarming repercussions in many patients over 6 or 7 years post op.

In a radiologists' study, they looked at 72 gastric bypass patients and found by CT scanning, that 41 of the 72 patients i.e. 56 percent) had some 62 "abnormalities" in their digestive tract. The "abnormalities" included leaks, hernia, spleen and kidney damage, hematoma, bowel obstruction and distended excluded stomach. (REF: Diagnostic Imaging - September 2, 2004)

And if healthy food choices, slight calorie restriction combined with exercise, can reduce sugar levels even in a diabetic diagnosed many years ago, one would wonder why a person should even consider getting one's digestive system permanently surgically changed.

Articles like this one in the "New Scientist" do a lot of harm in misleading people to make permanent changes in their organ systems, a move which many find does NOT work real well for them but can give them a whole new set of co-morbidities and a lot of grief.
Posted by Sue Joan at 12:34 AM 3 comments: