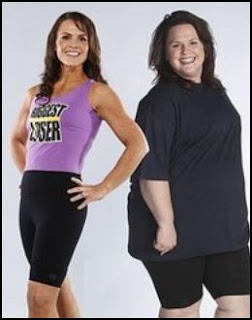 Lately the reality show, "The Biggest Loser" in which they sequester several clinically obese people, put them through grueling workouts of 5 hours or more a day and greatly curtail their food intake to effect quick weight loss, has come under no small amount of criticism.

It has caused a hue and cry among personal trainers and especially exercise physiologists who feel that the training given on the show is not only somewhat sadistic but sheds a negative light on personal trainers in general who try to teach people a healthy lifestyle.

Possibly what is most upsetting to the producers of the show (which apparently has versions in several other countries besides the USA) is the fact that the ratings of the show now in its 10th season, have fallen drastically, which can be a death knell for any TV show.

So tonight, NBC aired a show which promised to catch us up with what former contestants on the "Biggest Loser" are doing now and did they regain the weight, but actually seemed more of a "damage control" effort to try and convince the viewing public that what is done on the "Biggest Loser" is really a good thing and has changed lives.

Injury on the show has apparently (and rightly so) upset the public so the show dealt with that issue. The 9th season featured as the first challenge, a 1 mile run for clinically obese folks who had not exercised in quite a while and ended up with one of them, Tracy Yukich collapsing and being air lifted to the hospital where she remained for a week or more.

Dr H went to her home to visit and they relived the incident where she collapsed. Tracey's eyes filled up with tears when she watched the video and she commented that she thinks about this every day. She also said, "here I was 37 years old and almost - well gone."

Tracy is slim now and writes cheerfully on her facebook fan page that:

The Biggest Loser has changed my life. I never dreamed I would be at my college weight again. I am so grateful for all that have touched my life and helped me through this journey.

Tracy's website claims that she collapsed from heat stroke but that she was in the hospital for two weeks after, seems there might have been more wrong. Tracy uses her Biggest Loser fame and that she's kept the weight off, to do motivational speaking now.

On the catch-up show we watched on Wednesday night, they didn't say what happened to Tracey. The only explanation given by Dr H was that she was so fat, she had fat everywhere. Tracy weighed 250 lbs at 5'2" which while clinically obese, wasn't exactly the largest contestant either.

In researching this, I found out that likely what she had was "Rhabdomyolysis", a condition of muscle injury where the muscles break down releasing a chemical which injures the kidneys and can cause kidney failure.

The outcome of this illness (which also can happen with statin drugs by the way) is unclear according to the NIH:

The outcome varies depending on the extent of kidney damage. Acute kidney failure occurs in many patients. Treatment soon after rhabdomyolysis begins will reduce the risk of chronic kidney damage.
People with milder cases may return to normal activity within a few weeks to a month or more. However, some continue to have problems with fatigue and muscle pain.

According to another article, Tracey was restricted while on the ranch for any workouts, even in the pool so while she may be training for a marathon now, she may still have residual damage to her kidneys.

Quite a bit more than the "heatstroke" claimed.

Another contestant in that same season, Abby, got an early injury to her tibia and was also restricted from the grueling workouts and challenges.

Injury in the contestants was not really discussed in Wednesday's show though, which was filled with praise and emotionally filled statements of how the "Biggest Loser" was changing lives. Dr H. actually claimed that this reality show had found "the answer" to obesity and should get the Nobel Peace Prize. (Yes he said this with a straight face!).

Another problem which has cropped up is Ryan Benson. He was the season one winner who told all on his Myspace - about how he dehydrated himself for the final weigh-in using techniques he'd learned in wrestling and how he re-gained 30 lbs (just water weight) in the week after the finale.

The show ended with featuring the 9 winners of the "Biggest Loser" in a healthy Thanksgiving dinner (which although everyone oohed and aahed about how great the food was, it didn't look real appealing to me). Ryan Benson was at the dinner and said how he re-gained all the weight because he'd gone back to his old habits and how he was so inspired at seeing the other winners, some of whom looked a lot heavier than when they won the show. Erik Chopin claimed to have lost the 122 lbs he regained and although he looked a bit slimmer than he did when he appeared on the Season 9 finale, he didn't look anything close to how he looked when he won the show.

The show was supposed to convince us that those who had been contestants on the "Biggest Loser" had had their lives changed, had gone on to make careers of motivational speaking etc and how they were living the dream. But it was unconvincing. Some of the contestants in telling about their lives and their experience on the "Biggest Loser", wept while they were talking, suggesting they may still be emotionally damaged from the experience.

Out of some 200 people who had been contestants for the show, only 35 were "caught up with" and most of them were from seasons 8 and 9. But 35 had not kept off all the weight. As we know, Ryan Benson was back to his original weight and Erik Chopin was somewhat up in weight. A couple more had obvious regains. So that leaves only a few like Tracey, Alli, Tara, Mike who had kept it all off. About 7 percent or less of those who had been contestants on the show.... Hardly as Dr H claimed, a "cure" for obesity.

Will it work to save the show's dropping ratings? Only time will tell. That several have spoken out against the training and other issues (like Kai who was not mentioned at all) is hard to blow a smoke screen over. Emotionally and physically injuring obese people is not really acceptable in any circles, not even the most fat phobic ones.
Posted by Sue Joan at 2:32 AM 3 comments: 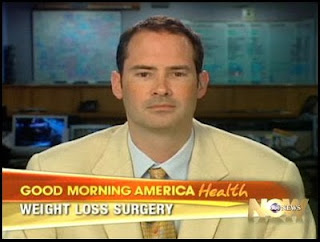 In a video on the ABC website from "Good Morning America" this surgeon who is head of the Baylor Weight Loss surgery unit, does give that impression. In the video, he not only advocates ALL WLS for not only clinically obese, but also for "lower weights" i.e. for people with a BMI of 30 and over. While not openly misrepresenting, one could easily get the wrong impression of WLS from this video.

When asked about the risks, he brushed the question off with a "it depends" and changed the subject. Later he focused on the difference between having open surgery and lap surgery, giving the impression that that's the only concern about weight loss surgery which is so not true.

He also, said the surgeries done today are less risky than done 10 years ago. That's true but only of the lap band. The RNY - gastric bypass is basically the same risk (it hasn't changed). And today's RNY with transsection of the stomach, may actually be more risky than the older loop gastricbypass which left a larger pouch and did not cut the stomach into two pieces.

They have no data as to weight maintenance over 10 years post op (1 study of 100 patients went 12-15 years post op) but that 10 year post op data they have suggests that most patients after gastric bypass have an average BMI of 35 and that was the same with all procedures. In the small study of 12-15 year post op gastric bypass patients, 68% suffered involuntary vomiting, 68% had suffered a plugged stoma so it was not complication free at all.

Many are frightened into surgery by thinking they are under less risk having surgery than remaining fat however, there is no evidence that this is true.

Even the release form for gastric bypass (which is given to prospective patients so it's not "anti WLS") warns about this:

(I know many slim people who have type II diabetes)

One doctor interviewed for "Self Magazine" stated:

*** "Because it's risky, it's only appropriate for a tiny fraction of people with obesity—the sickest 1 to 2 percent. The idea that all obese people should get [WLS] surgery is insane."
Lee Kaplan, M.D., director of the Massachusetts General Hospital Weight Center in Boston in "Self MAGAZINE: 'The Miracle Weight Loss that isn't' AUG 2008 ***

I am reminded of a quote from one of the patients featured on the show about weight loss surgery, "Big Medicine" (which disappeared rather suddenly from the scene and so far has not gone into re-runs). The show filmed him being sent home and them bringing a gurney which was too small etc etc. He later wrote that this was all staged and he had never been sent home from the hospital (I think the idea of this drama was to emphasize how insurance sometimes did not pay for WLS). When people on the forum expressed surprise that a so called reality show had staged a scene, he wrote back "Well, you don't believe everything you see on TV, do you?"

Especially when it comes to risky surgery, prospective patients are encouraged to research the studies or to consult a gastroenterologist first... (someone who does not stand to profit by a decision in favor of surgery).
Posted by Sue Joan at 12:22 PM 4 comments: