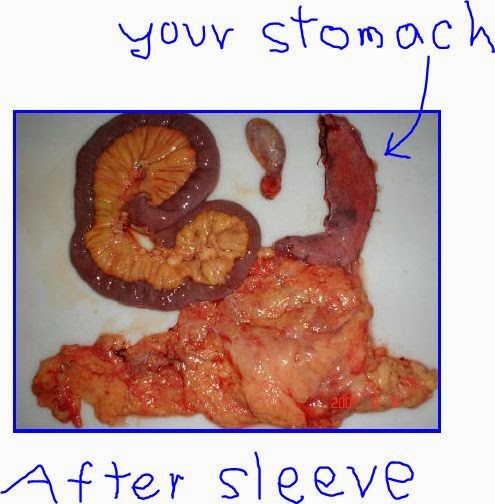 So say the providers in the latest article circulating the net...  that the ONLY way to keep off weight is to have one's stomach basically deleted!
Frankly, this article seems like it's another plug for surgery (picturing the usual midline shots of overweight people, of course) because they say permanent weight loss is just about impossible unless you get surgery preferably the surgery "du jour" now, the gastric sleeve which in most cases, calls for the removal of 95% of the stomach, leaving things wide open for not only nutritional deficiencies like B12 which is digested in the stomach but lack of necessary fats and more. (You can supplement protein if you drink protein drinks but things like calcium from supplements is not used well and can cause kidney stones - I found that out the hard way). Yes people can live without a stomach but how well they live, is questionable.
And the sleeve, unlike the gastric bypass, is in no way, reversible.  If people do some research on weight loss surgery, they might find that if it were so great, why do they have to keep coming up with "new procedures" (when the old procedures not only don't work for most people in the long run but also tend to cause rather gnarly health problems.)....
One individual who did stay slim and seemed the poster child for a drastric weight loss surgery which took out not only most of their stomach but most of their small bowel too, found out when they fell and broke several bones, that they had an extreme case of osteoporosis despite being careful about supplementing.

Watching a gastric sleeve surgery is interesting - the picture is worth 1000 words? As they staple away most of the stomach, leaving something about as big as your thumb (and about twice as long as your thumb), they take what looks like the stomach and toss it into a pan destined for "pathology" (i.e. the step before it becomes garbage).
And that's why if people have the gastric sleeve, even if they get very sick, there is no chance for reversal of this surgery.  As surgeon, Dr Terry Simpson puts it, "fat and healthy greatly beats slim and sick!"

Truth be known, even with basically no stomach, most people end up regaining weight and if you read the fine print on the surgical sites, the surgeons EXPECT people ... most people to regain at least 50% of what they lost... so... if you lose 100 lbs with the surgery, your surgeon will expect you to regain at least 50 lbs which still makes you significantly overweight even though you will be a success in the surgeon's book!
It has always amazed me how open surgeons are about these er...drawbacks to surgery.... how it's not going to work unless you diet and exercise (well that works without surgery too!).... how it causes repercussions....how 1% of patients die in the first month,  how if people eat too much, it comes up again (they joke about that).  And of course, there are lots of things one can eat too much of like milkshakes which go down well.

And yet people still keep opting for surgery - only to find out the sad truth later on - that with or without surgery, keeping weight off requires OUR OWN surgery to the brain - how well I know about that one.
"There is no easy road to a place worth going" (Beverly Sills)