what is and what isn't about weight loss surgery 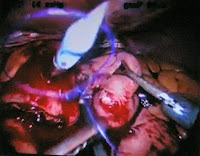 In case you haven't heard of the Obesity Action Coalition, they are a group determined to rid the world of obesity by way of weight loss surgery. Recently they had a conference which was at least in part, underwritten by Ethicon Endo which manufactures lap (gastric) bands and also surgical instruments for doing gastric bypass. And by at least one of the conferences which is online, it appears they are definitely selling the surgery.

Which of course, is their right. But what I felt compelled to blog about is, while reading through the transcript on line in an easily readable form thanks to "Melting Mama", it struck me how one bariatric surgeon, Dr Stegemann of Texas, appeared to give some misleading answers.

Here are the ones which jumped out at me (there may be others):

Question: "I have high blood pressure and diabetes this runs in my family, can this surgery really help me..."

Dr Stegemann answered "Absolutely. Significant weight loss improves many of the medical problems that come along with carrying extra weight!"

There is some evidence that weight loss can help health but equal evidence that it's lifestyle which is the key and not what you weigh. However, what he didn't say is, there is no evidence that doing something unhealthy or risky to lose weight improves health. And plenty of evidence to the contrary. And the questioner asked about surgery specifically and not generally about weight loss.

When asked which surgical option is the safest, Dr Stegemann's answer was very evasive and very non informative.

He began by saying that all surgery has risks. (no brainer) And then, went on to say that the risks of "most" bariatric surgery operations is similar to gall bladder surgery. While that has been said to be true of the lap band, it is not true of any of the other surgeries. The risks of the gastric bypass surgery have been compared (by the Fresno Hospitals for one) to open heart surgery.

The commentator of the session saw that Dr S had not really answered the lady's question about which option is the safest so he asked the doctor to be more specific.

But the good doctor again appeared to evade (as he did later in the session when someone asked a similar question). He responded by saying: "The most common weight loss surgeries done in the US would be the adjustable gastric band, gastric bypass, and sleeve gastrectomy."

Notice he still never gave the risks of each procedure which was the original question. The moderator gave up and went on.

The next question was asking how it feels to have a lap band.

Dr S's answer is worth quoting:

"The band works by controlling hunger and controlling the amount of food you're able to eat. So, you'll be able to eat the same foods, but smaller amounts will make you feel satisfied."

There is no evidence that putting a band around the top of your stomach does anything to the appetite unless of course the idea of it growing into your stomach (which happens in a number of cases) scares you and you lose your appetite that way.

Also it doesn't control the amount of food either - it just makes it uncomfortable to eat healthy foods like meat, vegetables and fruit. Cake, milkshakes and cookies slip right down and you can eat any amount of these comfortably. (and many patients do).

And there is no evidence that with a band or even a gastric bypass, smaller amounts of food make you satisfied. With the gastric bypass, you spend a long time healing and during that time, just like when you recuperate from any major surgery, you might have less appetite especially as your digestive system has been very rearranged, but after that healing process which may take as long as a year or a few months, the appetite returns (in most patients unless they become seriously ill) with a vengeance. At least one clinical study found that in many gastric bypass patients, the blood sugar levels are "irratic" and many patients experienced "voracious" hunger a couple of months after surgery. (Roslin - who is a bariatric surgeon -Roslin M, et al "Abnormal glucose tolerance testing following gastric bypass" Surg Obesity Related Dis 2009; 5(3 Suppl): Abstract PL-205.)

"If you overeat, then you generally feel pain in your chest, usually followed by vomiting."

It really depends on what food you overeat. Mostly, the pain after eating comes from a piece of food like meat, getting stuck and not going down right. The pain part is correct. I've seen it in band patients (also happens in gastric bypass patients). But patients aren't always able to vomit since the bottom of the stomach which pushes the food up is far away from the "stuck" food (and the muscular pylorus - lower stomach valve- which causes vomiting, is totally missing in gastric bypass patients). Usually band patients and gastric bypass patients endure a couple of hours of intense pain before the stuck piece either goes down or comes up. Occasionally a 'scope is required to fix things. Can be scary, can be nasty and is very likely to happen with a piece of badly chewed steak. You can fill up on cake and milkshakes and potatoes all day with no repercussions.

It is true however, if gastric bypass patients overfill the tiny stomach pouch, they will upchuck, often without notice. Again it's not really vomiting because there is no warning or sickness before. The food just comes up. Many learn the feeling and run to the bathroom. But most gastric bypass patients can tell tales about the "barf bags" they carry in the car or upchucking at a restaurant table.

Fooling with such a complex system as the digestive system has a very dark side.

The next question was about the gastric sleeve, a procedure in which 85-90% of the stomach is stapled off and removed from the body.

Dr S admitted there is no long term data about the safety or efficacy of this procedure but said since other stomach surgeries are safe and short term data on weight loss looks good, this surgery is likely safe and effective.

However, Dr Robert Davis of the "Big Medicine" TV show, admitted that the weight loss data with the sleeve had been poor and that's why they had to go to removing so much of the stomach. The recalcitrant stomachs tend to stretch out apparently.

So bottom line, there is no information available about whether this procedure is either safe or effective. There are many things digested in the stomach and from the information we have about the duodenal switch, Dr Hess, the inventor, stated that it was to significantly cut down stomach acid (and reflux) that they went to removing most of the stomach but without enough stomach acid, most of the stomach produced enzymes will not work either (see "digestion" in any Anatomy and Physiology book).

Then Dr S states that "After a gastric bypass, approximately 85% of patients are able to maintain at least 50% excess weight loss long term."

First keep in mind the average weight loss surgery patient is looking to lose 100 lbs so the doctor is saying here that most patients can keep off 50 lbs with a gastric bypass - but is 50 lbs worth the surgical changes to the digestive tract and lifetime vitamin deficiencies? Most folks can keep off 30 lbs with no surgery!

Second, many studies I've seen do not show this high a percentage of patients even keeping off 50% of the excess weight. Some of the studies by bariatric surgeons can be misleading because obviously those who regain (many patients!) do not report in and are listed as M.I.A. and not tallied in the statistics. More likely this statistic is 85% of those who reported back to the doctor can ...

Finally, there is the doctor's statement that: "Studies show that in 80-85% of people who undergo gastric bypass, their Type 2 diabetes resolved."

There is a lot of good information about repercussions, side effects, post op care etc in this speech so it's worth reading - just watch out for the affore mentioned statements - as they are misleading.
Posted by Sue Joan at 9:42 AM 3 comments:

The People of Walmart emails 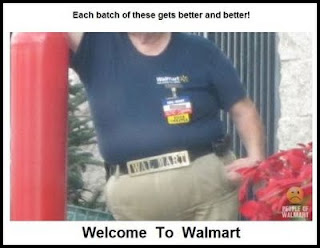 Every so often someone sends me an email, entitled "The People of Walmart". Apparently, these are supposed to be uproariously funny. The people pictured are real people and the folks who like these emails, tell me that these people are dressed in - shall we say - less than fashionable outfits and that they "should know better" (and thus, deserve to be ridiculed?). Which isn't true of the greeter above, by the way, who simply is wearing the Walmart uniform.

It is assumed, I guess, that none of these people have computers and thus will never see the emails ridiculing them. However, today, more and more folks do have computers and so if they see photos of themselves in an email with comments like "I can't stop laughing at this", would they be very hurt? I suspect they might and if the world is hurtful enough, why take the chance of hurting someone more than life might have hurt them previously?

And we must ask, does anyone "deserve" to be ridiculed, regardless of what they wear, how old they are or the size of their bodies?

What really bothers me about these mails is the underlying "elephant in the room" which no one wants to mention, and that is that although I'm certain that outlandish clothing is worn by people of all sizes and ages, the only individuals who get pictured in the "People of Walmart" emails, are overweight and/or elderly.

So what are we saying with this email - that people of size or over a certain age, should be "open season" for ridicule? And since many of those who have sent those emails would fall into both those categories (elderly and overweight), are they laughing at their fellow humans in an effect to say "well, look how bad these people look - I know *I* don't look that bad!"?

By laughing at the "people of Walmart" , we seem to be not only reinforcing our negative feelings about our own looks or girth but letting those around us know, it's "ok" to ridicule the elderly and/or people of size. Whereas if we viewed these fellow humans, in the way emphasized in a recent EWTN "Catholic View for Women", looking for the inner beauty instead of judging them by their exterior, we might become more aware of our own inner beauty which is not contingent on having a size 0 figure or being 20 years old!

The other side of the "People of Walmart" emails and the prevalent attitudes about size, is that our children who should be nourishing well, in their developmental stages, are increasingly coming down with eating disorders and/or disordered eating, in a sad effect to avoid being like "the people of Walmart", an object of ridicule. The average 8 year old is already on a diet and restricting the very nutrition they need to grow strong and healthy!

I think we need to realize that these emails are not only hurtful to those who may be pictured in them and hurtful to some of those receiving the emails who wonder when they will be pictured but also, hurtful to the sender who is ridiculing fellow humans on the superficial basis of size and/or age.

Respect for all human beings will build respect for ourselves!
Posted by Sue Joan at 2:53 AM 2 comments: