All he did to lose weight was eat less and move more? 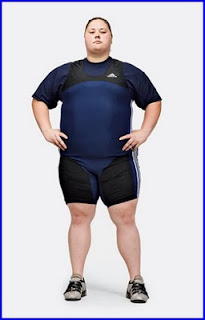 An article on CNN covers the weight loss of a man who went (they claim) from almost 500 lbs to "one-der-land". The man, Matt Hoover (who ironically is a namesake of one of the Biggest Loser Contestants of the 2005 season), told CNN his weight loss journey lasted 3 years. Most of the article is detailing "how terrible he looked" as a person of size and the usual. Finally a couple of sentences way down in the article tells how he lost the weight.

Predictably, he "ate less and moved more" that is, the article states:

He ate smaller portions and took daily walks. The first 120 pounds came off.

And in case we didn't understand how the weight melted off when he "just got off the couch", he's quoted:

"When you're that big, you can lose weight pretty quickly," he said.

The article goes on to say that Matt plateaued out at 150 lbs over his goal weight and then, joined Weight Watchers and "lost the rest of the weight"

According to this article, Matt had no health problems (or I'm sure they would have mentioned them) and it was all how "bad he looked" which motivated him.

Hey, if a person wants to lose weight (or not lose weight) that's fine - our bodies are ours to do with them what we want.

What I found very objectionable in this article was the following:

1. The article implies that the only reason Matt got up to 470 lbs was because he ate too much and moved too little in other words, "he sat on the couch, eating bons bons all day so no wonder he was so fat", and this idea is I think, what CNN wants to convey to the readers. But the reality about obesity is that according to Dr Rudy Leibel and the scientists who study this stuff, size is mostly genetic.

2. The article gives the impression that once Matt started eating as a "normal person" i.e. not totally overstuffing himself while sitting on the couch, the weight just "dropped off". And that is so not true! For a person who is genetically/physically obese to lose weight and keep it off takes daily vigilance almost to an obsessive level.

To expand on the second point, while the article implied that Matt just had to "get off the couch" (they never did detail what his exercise program consisted of however), ordinary exercise does not keep off any weight if you've got a certain set of genetics - I can personally attest to that one!.

For example, the Matt Hoover from the "BIGGEST LOSER" (not the same guy as in this story, I'm pretty sure) is described in one article as exercising 25 hours a week (he did regain some, it says from his "Biggest Loser" season but is determined to get it off):

Hoover spends 25 hours a week training for the grueling triathlon, which consists of a 2.4-mile open-water swim, a 112-mile bike ride and a marathon 26.2-mile run.

In my research I have found that societies in which there is no obesity, typically move 25-40 hours a week and eat about 1200-1400 calories a day.

Now that's a lot more than just "getting off the couch" and "eating smaller portions".

This type of article is falsely misleading. To the person of size who thinks that they can exercise an hour or so a day and eat a bit less and the weight will drop off, they will be very disappointed when they can actually gain weight eating normal amounts of food even if they do exercise. (How well I know about that one!)

And for those 85% of society who do not have to fight clinical obesity, articles like this just fuel the flames perpetuating the falsehood that shaming people of size is actually "good for them" because they might get motivated to "eat less and more more" and the "weight will drop off", as it did with Matt Hoover who is not the Biggest Loser contestant in this article.

I know people of size who have awesome achievements, careerwise and life-wise and even are very good looking, and yet, feel themselves failures because even though they already "eat less and move more" the weight just doesn't fall off them like it does on people in the newspaper or on TV. These feelings brought on by articles like this CNN article, filled with falsehoods and misleading statements, can lead people to drastic measures including unhealthy diets or even surgery to cripple their digestive system (what Dr Fobi, WLS surgeon calls the gastric bypass) or worse.

In a world which needs more love, isn't it time we enjoy people for who they are and just accept that in a country like ours where food is in easy access, people are going to come in all sizes and so what? What if we were all the same size - it would be pretty boring! (look at manikins for example). :)

Note: the photo included with this blog is Olympic athlete, Cheryl Haworth who won an Olympic medal in Weight Lifting. Like all elite athletes, she trains hard for several hours a day and watches what she eats. She also weighs over 300 lbs. People do come in all sizes and just because someone is a person of size, doesn't mean they lie on the couch all day, eating bons bons.

Like one of the TV reality show stars quipped when someone called him on a misrepresentation in a so called "reality show".

Well, you cannot believe everything you see on TV!

A new study of 1.5 million people suggests that obesity, even overweight, shortens your lifespan. So says the study - obese people are 44% more likely to die earlier than those in the so called ideal BMI range.

The findings and size of the new study, which was conducted by researchers at the National Cancer Institute and published in the New England Journal of Medicine, should settle the debate over the relationship between excess weight and the risk of early death

So says Ali Mokdad, Ph.D., a professor of global health at the University of Washington, in Seattle.

According to one report on a local TV station:

The latest research was launched after a controversial 2005 study by the Centers for Disease Control and Prevention that concluded being overweight didn't raise the risk of death; that report included smokers and those with pre-existing illnesses.

The CDC study was actually a re-examining of existent data and an admission that the wrong conclusions had been drawn. It was only controversial among those advocating diets!

In 2005, the CDC reassessed their data, stated one news article in the Seattle Times, and found that 112,000 people (not 300,000 people) had died from obesity related diseases however, they also added that since people with BMIs in the overweight zone (BMI 25-29) live longer than those in the "normal ranges", one had to subtract 86,000 from the 112,000 and that leaves 26,000 people who die from obesity related disease... less than who die from gunshot accidents!

The new study doesn't settle anything because it made the same mistake pointed out by Dr Stephen Blair, PhD, head of the Cooper Institute.

I'm sure the pundits are banking on the fact that the public either has a short memory or else, hasn't seen the Cooper Institute studies.

However, some reports on the new study included the remarks of the lead researcher on the Cooper Institute studies, Stephen Blair, PhD:

University of South Carolina obesity researcher Steven Blair said the results were consistent with other studies and the "massive effort" was commendable. But he said there wasn't enough information available about fitness level or physical activity. A proponent of the "fit and fat" theory, Blair said his research has shown that obese people who are tested and deemed fit did not face increased risks of dying.

"If we want to get to the bottom of the health hazards of overweight and obesity, we have to have better data on physical activity," Blair said. "Until we do that, there's uncertainty of how important BMI is as an important predictor of mortality."

Seemingly coincidental to the release of this new study which looks impressive to the unquestioning eye of the public, the Allergan company has petitioned the FDA to lower the weight limit for obtaining the lap band obesity surgery. Right now, only people who are at a BMI of 40 or higher, or 35 with co-morbidities can have their insurance pay for a lap band. Allergan would like to see that minimum weight lowered to a BMI of 35 or 30 with co-morbidities.

Even CNN remarked on the fact that the head of the FDA committee petitioned to lower this weight requirement, owns stock in the Allergan Company! Not only did she not recuse herself (which she should have done!) but the FDA voted that it was "OK" for her to be on this committee as long as she didn't vote!

The lap band is a much safer surgery than the gastric bypass. It's a band placed around the top of the stomach which can be tightened or loosened and is supposed to limit how much a person can eat and thus cause a weight loss. Of course, what it limits (when it's not swollen i.e. some band patients complain of their stomach swelling shut in the morning) are the good bulky foods like veggies. Milkshakes, ice cream and cake go down beautifully. Although unlike the gastric bypass which is greatly troubled by long term vitamin deficiencies in many patients, the lap band is not without its own set of repercussions. A certain percentage of patients experience the band growing into the stomach, thus requiring removal and/or a gastrectomy. Mostly what I hear lap band patients complain about is discomfort and difficulty in keeping off the weight. The difficulty in keeping off the weight complaint, one hears from gastric bypass patients also.

What science really says is, if you cannot keep off the weight, it's healthier to not lose it in the first place as "weight cycling" or "yo yo dieting" raises the risks for heart attacks significantly.

About 5% of the public born with the obesity gene (according to obesity researcher, Rudy Leibel, size is 40-60% genetically determined) can lose and keep off the weight (7% with weight loss surgery according to the Hebrew U Study for one).

For the rest, it is strongly recommended that they consider following the "Health at Every Size" guidelines - Linda Bacon's book on this is excellent!

A clinical study at USC found that those following the Health at Every Size, guidelines without a focus on weight loss - ended up healthier than those who dieted - this study is highly respected and the cohort was followed for two years. Linda Bacon was one of the researchers and the other researcher was Julie Stern who is a member of the Weight Watchers scientific committee. Undoubtedly, Stern is not opposed to dieting and yet confirmed the results of this study which headlined "Non-dieters more successful at boosting health than dieters, study finds".

Isn't it time to "stop the insanity" and focus on real health which is determined by healthy food choices about 80% of the time and regular aerobic exercise?
Posted by Sue Joan at 2:46 AM 3 comments: